On Feb. 19, 2016 the Orion Trio performed another lunchtime concert at the Savannah Center in The Villages, FL.  We featured Phil Caltabellotta on harmonica and recording artist Bill Neale on guitar.  Phil is a world-class virtuoso on his instrument, and Bill is also, having played on many TV shows, film scores and albums.  He was also the guitarist with The Temptations at a very young age.  Davis Collister was on electric bass, Jerry Bruno on drums, and Thomas Pizzi on keyboards.

We opened with Bill on guitar playing “Fly Me to the Moon” and one of his original tunes “Winter Warm-up”.  Then Phil joined us for a mixture of swing, Latin, and ballads such as “The Lady Is a Tramp”, “Here’s That Rainy Day”, and a last minute audible called at the line of scrimmage, “There Will Never Be Another You”.  An enthusiastic sold out crowd of almost 300 were in attendance.  It’s always good to see many familiar faces and friends at these shows, and we thank you for your support.

In the audience also was Bob Benedetto, who lives in Ocala FL and is a highly renown luthier of jazz guitars.  His handmade arch-top guitars are played by many famous guitarists all over the world, and there is one in the Smithsonian Museum’s permanent collection.  His company also builds high quality amplifiers, and guitarist Bill Neale is President of that division.  Bob was kind enough to post pictures of the concert on the Benedetto website, and the Orion Trio is proud to be featured in their ‘News Flash’.  You can visit the link here.

Due to the fact our concerts always sell out quickly and many people who wish to see us don’t get tickets in time, we have decided to offer evening concerts periodically as well.  These will also be at the Savannah Center at 7pm, dates TBD.  To make these shows extra special we will be featuring a 6 piece band, a longer show with two 40 min. sets, and audience members may bring food and drink (alcohol is ok) to their tables.  Tickets will be available through The Villages box office.  These shows will not be advertised in the papers, so if you would like to stay informed please ask to be put on our mailing list, and you’ll be part of the ‘hip’ crowd. 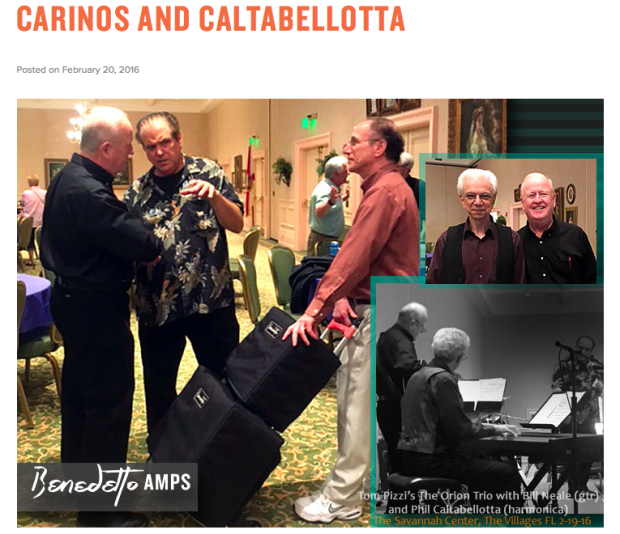 Scenes from the concert as posted on the Benedetto website.